Food service operators and restaurants are making efforts for fighting against food waste, as responsibility and the carbon footprint of food are emphasized more and more. The economical aspect is of course significant, as well – food waste causes major losses. Jamix, celebrating its 30th anniversary this year, has created a digital tool for professional kitchens enabling accurate orders for ingredients, as well as providing calculations for the carbon footprint of food and nutritive values. The company has grown into being the market leader in Finland, and has gained a foothold internationally, as well, especially in the United States. 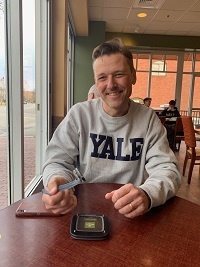 Jamix is a pioneer in its field. Mikko Jaatinen, CEO and founder of the company, started to develop the system in the beginning of 1990, when ingredients were ordered to the kitchen by telephone and quantities were based on rough estimates. This tended to result in huge amounts of wastage, and it was hard for the kitchens to monitor if they were staying on budget.

– The customer’s budget might have been used already by November, so for the rest of the year you had potatoes to work with. The daily routines have changed a lot in the professional kitchen during 3 decades. Today the budgets are planned carefully, there are several special diets being served and the origin and the environmental effects of food are taken into account, says Jaatinen.

One of the system’s users is Omnia education and training center in Espoo, Finland. Around 1000 diners visit Omnia’s restaurants daily. According to Tarja Hämäläinen, Omnia’s Services Manager, they have been able to reduce the amount of wastage significantly and the use of time has become more efficient, as well.

– Before we implemented Jamix, orders were made by telephone and recipes had to be developed by ourselves. There were huge amounts of waste, as there were no precise amounts for ingredients in the recipes.

Omnia has made many efforts for reducing wastage. Trays have been taken away, and instead there is a so called generic plate. You take soups and other food on the same plate which results in appropriate portion sizes. The customers are reminded about reducing wastage and Omnia collects customer feedback continuously so that there would be as many preferred options on the menu as possible.

– With these actions we have been able to reduce the amount of food waste by 350-450 pounds a week. That means that we have gotten rid of the cost of one food waste container. We are hoping to implement a scale for food waste, as well. It would make the amount of waste more visible both to our customers and to us, says Hämäläinen.

Huge market in the United States

Today Jamix is the market leader in the domestic market and most of the foodservice operators and restaurants in Finland use its system. Jamix has grown internationally, as well, and it has made major contracts especially in the United States. One of Jamix’s customers is Yale Hospitality, where the system is used in 16 Colleges, 11 Cafés, as well as in a large commissary kitchen and a bakery. Yale Hospitality prepares 18.000 meals a day.  The market potential in the United States is huge: There are 67.000 kitchens within the College & University Food Services alone.

– I believe that we are well equipped for reaching our targets with the strategy we have chosen, that is through college and university kitchens. Our advantage in the US market is, that our system is cutting edge. The customers have been amazed by its web-based user interface, usability and versatile features.

The United States has proven to be an interesting market where the right contacts have been essential in going forward.

– Coincidence plays a small role in everything, and for us becoming acquainted with a resptected and well-known person in the food service industry has had a big impact. We are currently negotiating with several universities and are hoping to be able to publish a new, major contract in the near future, tells Jaatinen, living in Boston since 2018.

Jamix is a Finnish company specializing in cutting-edge restaurant software for professional hospitality and food service operations to plan and organize recipe, menu, inventory and ordering management, and internal logistics. Founded in 1990 by a young Finnish student, in 30 years Jamix has grown from a small local business into a software company with 2500 + clients all over the world. Headquartered in Jyväskylä, Finland, the Jamix US office is based in the Boston. “Thousands of customers use Jamix to produce over one million meals, every day!”